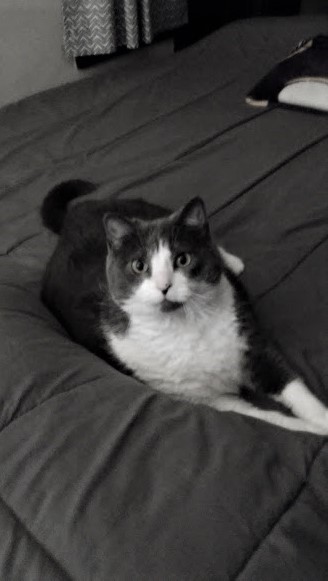 Kitty was born on a farm in 2005. She eventually changed owners 3 times before being welcomed in my home. She was 8 months old by then. The stuffed frog was given to Kitty by one of the families who had her but couldn’t keep her because they were moving out of state. I told them I didn’t think she’d play with a stuffed animal, but it turned out to be her favorite toy. Kitty was British Shorthair. She wasn’t an affectionate cat like some can be. Didn’t like to cuddle. Wouldn’t sit on your lap. Hated it when I’d give her hugs and kisses. We used to kid that it’s because she’s British and very conservative. She never slept on an animal bed because Lord knows I tried several kind. She liked to sleep under my bed, only on a specific spot on top of the bed, or on a cat tree. She had one favorite thing to do. When I retired from the federal government I was living in Indianapolis. We stayed a year with my grandson in his home while I traveled back to Minnesota to get things set up to move back. Every morning I’d take a cup of coffee and sit on the back yard deck as weather permitted. Kitty would sit out on the grass for as much as 2 hours just languishing in the morning sun. Once in a while she’d spot a squirrel, chipmunk or mole and test her hunting abilities. Never caught one but she had fun trying. Though she played with toys from time to time if encouraged, she was simply a solitary cat and thus fit very well into her owner’s lifestyle. That was her personality and we embraced it. She’s sorely missed.