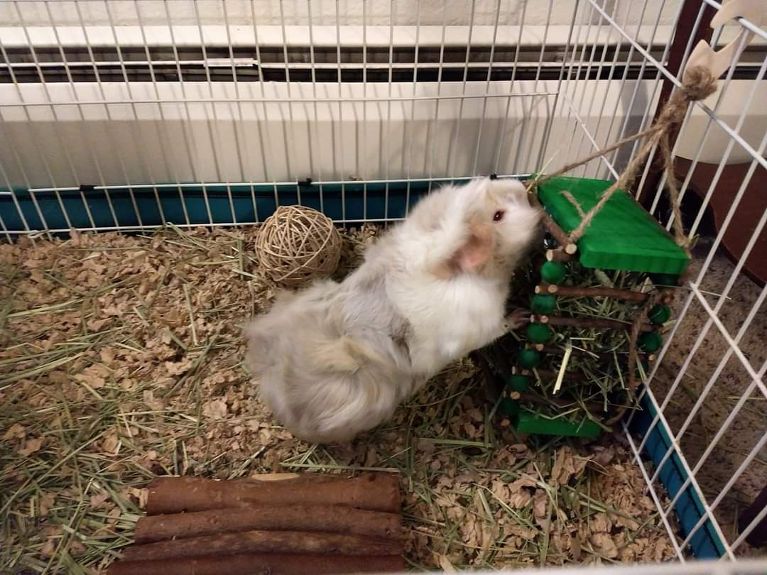 Rogue is the first guinea pig that I ever owned.  She came into my life unexpectedly in 2019. A couple of my friends who were married had just had their third child, all of which were very young, and they weren’t sure if they would be able to take as good of care of her as they previously had been able to. They cared for Rogue so much. Whenever I went over to their place they would let me give her snacks and take her out of her enclosure so I could hold her on my lap. Always thought that Rogue was super cute! At first she was nervous but eventually seemed to at least put up with me.

One day they went on vacation and asked me to watch her at my place. Wasn’t sure at first because, never owning a guinea pig before, I didn’t want to mess it up. It was one of the best decisions I ever made. I loved having her with me at home! She would squeak at me when I opened the fridge. Make happy cooing sounds if you scratched around her ears. Run around and jump up when she was happy. It was so cute! A while after they came back they asked me if I could take her in as it was difficult for them with their three kids and if I had her they would still see her often. I jumped at the opportunity because I lived alone in an apartment that didn’t allow large pets and next thing you know, I had a surprise guinea pig! She was the sweetest thing. Quickly found out her favorite foods were bell peppers, cucumbers, and oddly enough, frozen blueberries. Romaine lettuce and carrots were also on the menu. Rogue even helped me to start eating more veggies and salads just by having those foods for her. I let her keep the pellets and hay though.

Rogue was a travel piggy and went on a few adventures to a cabin with me and my family and was the perfect fuzzy travel companion. Whenever I was feeling down I could open the door to her enclosure and watch her run here and there, then under her favorite blanket. Often she would sneak up and start nibbling on my toes. Or I could just let her sit on my lap and she would let me pet her until she fell asleep.

Rogue improved my life greatly and unexpectedly and I will be forever grateful for the time, companionship and love we got to share together. I’ll miss you Rogue.