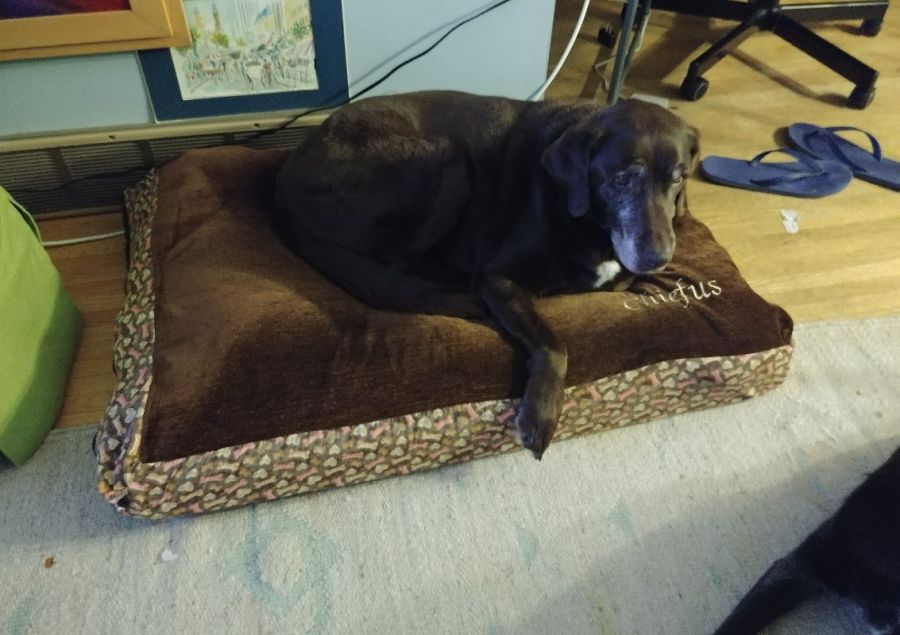 Not everybody knew Chief and I'm so sorry you didn't. Chief loved everyone he met and everyone he met loved him. Chief was adopted from the Crossroads Shelter in Buffalo, MN in February of 2005 at just 7 weeks old. He was adorable and we loved him immediately. Chief's name when we met was Snickers, he was not a Snickers. In the car on the way home we started tossing out different names and when Dad said "how about Chief, are you a Chief?", he popped his head up and stood up in my lap, look over at Fred and said "hmm". We looked at one another and said "yep, that's his name" and he answered to it ever since. Chief loved unconditionally from day 1. He was a people puppy, he wasn't so interested in other animals unless there were no people to play with. But if he could get a person to play with him then he was all about that. When my mother-in-law first came to visit after we brought him home he would bring her every single toy he had and put it in her lap to get her to play with him. He didn't understand that she wasn't up to playing right then, he was sure that if he brought just the right toy she'd break down and play. It didn't matter she'd already played with him for quite some time. He was only a puppy and could play for hours and hours without tiring. When he discovered the tennis ball there was nothing that could stop him from playing catch and stealing any tennis ball he could find.

Chief was the most loving and caring dog, when our nephew was just six weeks old and Chief was 6 months old we left them together with Everett's four year old sister and two of our other older nieces while we and their mom and dad went out for a couple hours. Chief jumped up on the bed next to Everett and wouldn't let anyone near him until we came home. Chief ingratiated himself into the lives of everyone, when we took a trip and had to leave him home when he was just a puppy we left him with my brother Jon, his wife Tina and their two daughters Erika and Gaby. When we arrived home a couple weeks later Chief was broken. He was sleeping in bed with them, on the couch and doing whatever he wanted. He continued doing so the rest of his life, however he was extremely well behaved and always respected his boundaries.

We never once worried that Chief would growl at a child, another dog, or another animal for that matter. He would share anything, if another animal came and wanted his food or his toys he willingly walked away, he knew he would be given more later, he'd never go without. We were so often asked by parents if it was ok if their child could pet Chief, if we needed to watch him with their child, the only thing I worried about him with them is if he might lean to hard against them because he loved them too much that he might knock them over. Or he might lick them and they wouldn't like it. Asked if he would bite them, we often told parents that they couldn't get Chief to bite if they put their child's hand in his mouth and pushed his jaws together. Our running joke was that Chief would show a burglar where things were in the house if they paid any attention to him. Or he'd cry if they left him. Chief literally loved anyone that paid attention to him

While we lived in Fergus at the lake and ran the Bed and Breakfast Chief was the unofficial greeter to all guests. They loved having him greet them in the morning, in the afternoons, if they were hanging around the B&B they'd often play ball or invite him on walks with them. Chief loved when we had guests as he'd often be the recipient of leftovers from their plates, his favorites were eggs benedict with hollandaise sauce, waffles or pancakes, (but if they didn't have syrup, they'd be thrown out of his bowl).
Chief spent hours and hours every day down at the lake when there were children present playing with them, jumping at full speed off the dock into the lake after a ball tossed by whomever was willing to toss it, and if they'd gone up from the lake out back in the meadow was just as good if they'd throw a ball there too. Either Fred or I would often have to go down to the cabin to get Chief after dark or we'd even sometimes get a call that he was down at the public access trying to find a willing ballplayer. One time Fred even got a call from the middle of the lake that Chief had swum out there to a pontoon to find someone to play with. They headed to our area of the lake and Fred went down to the dock and called him to shore, he jumped off the boat and swam to shore. Chief was always looking for someone that was willing to play with him.

As Chief got older he slowed down and just enjoyed hanging out at home in the yard, at times he missed his walks which he'd been used to. He had always been free to roam when we lived out at the lake in the country and when we lived in town and in Mexico he'd been walked daily until we moved to the house with the big yard. Unfortunately, he discovered a way out of the fenced yard at our last house in Mexico and took himself for walkabouts. He had us scared on a couple occasions. On his last walkabout he got lost. I was here in the states, he got rescued by a kind woman but we didn't locate him until it was too late to get him back that night. He was losing his hearing and we were close to a very busy street so it was pretty scary for us to have him get out. But he just wanted to go visit some friends. Had he not gotten lost, he'd have come strolling back within an hour or so. We fixed the fence so he could no longer get out after that scare.

I could go on for hours about Chief. He was our baby. He loved us as much as we loved him. Letting him go last week was one of the absolutely hardest things we've ever had to do. We've been through so many things with him. But he's been there through everything with us, the good, the bad, he's made us laugh and he's made us cry.

Chief we will love you forever, we know that you are waiting for us at the Rainbow Bridge. We know that GK has introduced you to Chelsea Kae and she loves puppies so much that she'll play ball with you forever and ever, and I know that Lucy and Gracie are there to play with you and Bailey is too, and hopefully she no longer bothers you.

The services for Chief have not yet been added. Please sign up below to be notified when the services are ready.

The attached photos are added to the memorial of Chief Sasseville to help share their legacy.

Please help memorize Chief Sasseville by recording your attendance below.

You will receive a notification text whenever there's an update to this obituary.

Thank you for sharing your memory of Chief